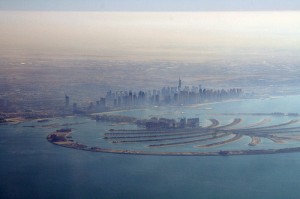 When I first stumbled across images of Palm Jumeirah, I was mesmerized. I never had a clue that such a unique and beautiful place existed in the United Arab Emirates. Palm Jumeirah is a man-made artificial island resort located in the Persian Gulf and obviously in the shape of a palm tree. The Dubai government built this beautiful resort by using land reclamation. Construction began in 2001 with completion expected in 2010. 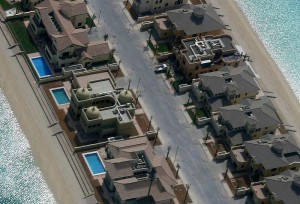 94,000,000 cubic metres of sand and 7 million tons of rock were used to pour into the seabed to raise the surface of the island. It is reported that two F-100 fighter jets were sunk near the island to create a habitat for sea life and double as an artificial reef. I’ll bet the diving is amazing here!

Palm Jumeirah is home to world-renown hotels, apartments, villas, beaches, retail shops and marinas. There are actually three Palm Islands under development of which the Palm Jumeirah is the smallest, The other two islands are Palm Jebel Ali and Palm Deira.